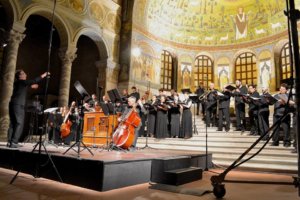 The Costanzo Porta’s long standing cooperation with the rich and prestigious Ravenna Festival continues in 2019, with its 30th anniversary edition, with the title “Per l’alto mare aperto” (“In the high open waters”).
The Festival – which as per usual will be held in some of the most beautiful and most historic spots of the city of mosaics, from 5th June to 16th July, 2019 – will this year see the choir perform twice, the first of which accompanied by its orchestra, Cremona Antiqua, and led by its conductor, Antonio Greco, for the G.F. Händel’s masterpiece oratorio, Messiah.
The location will again be the beautiful Basilica di S.Apollinare in Classe, which already hosted the ensembles in 2018 for a very succesful concert to the music of G. Gabrieli and A. Pärt, broadcast by national Radio 3.

Full programme and tickets on the Ravenna Festival website.